2016 Common Read / When the Emperor Was Divine: Videos

The purpose of the Common Read LibGuide is to provide readers with helpful resources to learn more about When the Emperor Was Divine, WWII American Japanese internment camps and the lives of those affected. 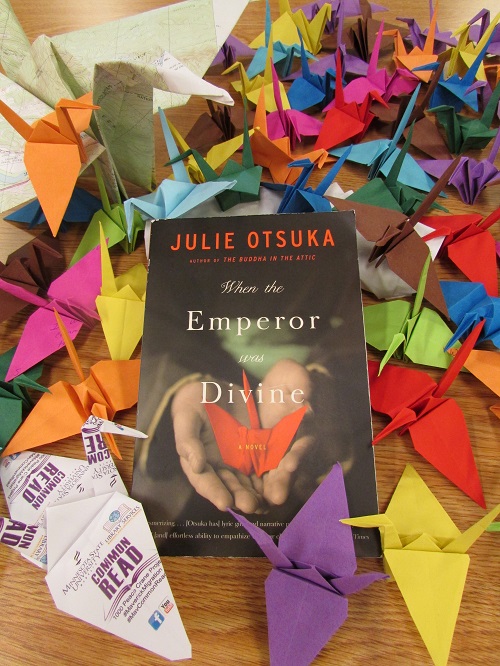 Meet the Author
An Evening with Julie Otsuka, on October 19, 7 - 9 pm.  Julie will discuss her award winning book in the Centennial Student Union ballroom.

September 7-30
Come check out the latest art exhibit in the Centennial Student Union Art Gallery (lower level near Hearth Lounge) and fold your own origami peace crane. Cranes will be available for viewing after the campus-wide installations.

September 24 11 am - 12:30 pm
Family Week Book Discussion. Families are welcome to join Honors students in Memorial Library (second floor) to assembly peace cranes and engage in a discussion about When the Emperor Was Divine.

As a young child during World War II, actor George Takei, along with thousands of other west coast Japanese Americans, were relocated to internment camps. In this video, he shares his family's experience of the two camps where they, as U.S. citizens, were forced to live.

Children of the Camps is a documentary that display direct recollection of individuals who were children during their stay in Japanese American internment camps. For some, this was the first time they shared deep emotions related to their personal stories. Stories are shared regarding experiences in the camps, life and school after camp, and family relationships and other situations that were greatly affected by the years spent in camps.
Watching Children of the Camps will require students off-campus to sign-in with their star ID and password.

During World War II, Toyo Miyatake was sent to a Japanese American relocation camp. While there he was able to smuggle in lenses and construct a homemade camera which he used to secretly document the plight of the U.S. citizens forced to live in the camps.

Cats of Mirikitani tells the story of Jimmy Mirikitani, a Japanese American artist born in California and raised during WWII in Japanese American internment camps. In this film, Jimmy is able to confront his painful past by embracing his passion of art.