Meet the Author of Beautiful Music for Ugly Children: About the Author

Reviews of the Book

Format For the Event

Live streaming of the event funded by Maverick Visual Productions, a service of ITS, and Library Services.

Formal-ish Bio from the Author 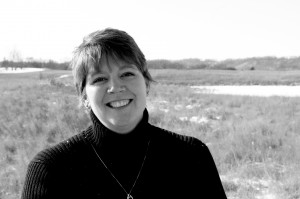 According to geographers, the American West begins at the 100th longitudinal meridian. Thanks to the fact that this meridian is the main street of her hometown in Nebraska, Kirstin Cronn-Mills grew up six blocks east of the West. According to her mother, she learned to read when she was three–and she hasn’t stopped since.

Kirstin is a self-proclaimed word nerd. Her grandmother and her father passed on their love of language to her, and that love became a love affair when she started writing poems in sixth grade. She still writes poems, but now she focuses on young adult novels.

In 1992 Kirstin moved from Nebraska to southern Minnesota, where she lives now. She writes a lot, reads as much as she can, teaches at a two-year college (she won the Minnesota State College Student Association 2009 Instructor of the Year award), and goofs around with her son, Shae, and her husband, Dan. Her first young adult novel, The Sky Always Hears Me and the Hills Don’t Mind (Flux), was published in 2009 and was a 2010 finalist for the Minnesota Book Award for Young People’s Literature.  Her second novel, Beautiful Music For Ugly Children (Flux), released in October 2012, which was placed on ALA’s 2013 Rainbow List (as a Top Ten Pick) as well as their 2013 Best Fiction for Young Adults list.  She also published a middle-grade science book in 2009: Collapse! The Science of Structural Engineering Failures (Compass Point Books).

–I love this picture of me with purple hair and an Elvis sneer.  Love it a lot.  It makes me look like I’m a fun person, which is 75% true.  The other 25% of me is a writhing mass of insecurity.

–I am really good at hyperbole and exaggeration, and I talk like a teenager way more than I should.  ZOMG!

–I love lemon water, with bubbles or without.

–Football (the American version *and* soccer) is my favorite sport to watch, though in American football, college ball is my favorite (Go Big Red!) because the pros tend to annoy me.  Favorite pro team:  Green Bay, because their fan spirit is the closest to the Huskers.

–If I don’t listen to music for a few days, I get droopy.  : (  Music is like blood or water–I need it in my veins.  What kind of music?  Almost any kind.  My list of favorites would take up this whole page.

–I have four tattoos, two of which you can see on any given day.

Articles About the Author